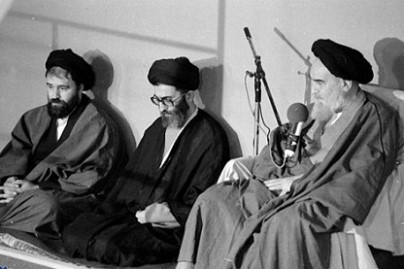 Navideshahed:
He had on agenda the tasks of making and coordinating organizations under the shadow of war and a fight against anti-revolutionaries and the Monafeqin and liberals at a time when in the foreign relations sphere there was a need to introduce the Revolution and the positions of the country in the face of measures taken against Iran by enemies.
Publish Date : 12:36 - 2015 October 13

The eight years of Ayatollah Ali Khamenei’s presidency was a period for the management of the war and economic isolation along with the important process of building and shaping organizations for the Islamic Republic. He had on agenda the tasks of making and coordinating organizations under the shadow of war and a fight against anti-revolutionaries and the Monafeqin and liberals at a time when in the foreign relations sphere there was a need to introduce the Revolution and the positions of the country in the face of measures taken against Iran by enemies.

The Islamic Revolution Document Center has made a review of the measures accomplished by Ayatollah Khamenei as the president of Iran on the occasion of the anniversary of his swear-in.

After Mohammad Ali Rajaei was killed as the second president of the Islamic Republic of Iran, the central council of the Islamic Republic party as well as the Society of the Qom Seminary Teachers unanimously introduced ayatollah Khamenei as presidential candidate despite his own dissatisfaction. Imam Khomeini two okayed his candidacy despite the fact that he had initially been against clerics taking the post of presidency.

In the Iranian year 1360 elections were held and ayatollah Khamenei won 95 percent of the votes. He was sworn in 11 days later.

Ayatollah Khamenei came to office at a time when the fledgling government had not grown into a well-shaped being and there were no workgroups behind the president to help him with his tasks. Ayatollah Khamenei first of all started to reshape the presidential staff and started his job with a number of advisors.

With all the problems at that time, Ayatollah Khamenei’s agenda was as follows:

·         Discovering and tapping domestic talents in all areas and professions

·         Establishing safety and freedom for all people that were faithful to the Islamic Republic, whatever mode of thought they may entertain

Despite all the trouble that the war had created and the fact that the Islamic Republic was in the beginning years of its life, top on Ayatollah Khamenei’s agenda was attendance to people’s economy and culture.

After his first term as president, Ayatollah Khamenei did not desire to run for another term, seeing the troubles and disagreements with some members of the cabinet. But as Imam Khomeini obliged him to become candidate as part of his religious duty, he agreed to run for presidency and once again was elected with majority vote.

The points on his agenda during the second term were:

·         Reducing the government’s involvement and relegating affairs to people

·         Eradicating chronic poverty that prevailed the lives of people

·         Giving farmlands to people and governmental industries to cooperatives

The notion of culture and fighting non-Islamic culture has been among the prominent policies of Ayatollah Khamenei. This is evidenced by his presidency over the Cultural Revolution staff and the Supreme Council on Cultural Revolution.

Intense pursuance of related issues was so that in the six first months of launching the council, 31 sessions were held where major policies were adopted on the country’s cultural affairs.

Another important area of Ayatollah Khamenei’s active policy was reshaping the Islamic Republic’s foreign policy. The most important points in this regard were:

·         Adopting independent, well-adjusted policy in regard to each country and decision making in respect for the country’s expediency spiced with decisiveness and clarity

·         A return to the rich, novel Islamic culture in the international arena as a barrier against enemies