The senior Bahraini Shiite cleric has been in jail on a nine-year prison sentence since late 2014 for what the Manama regime has called "insulting” government officials, "inciting” unrest through his speeches targeting the authorities during the 2011 uprising, attempting to overthrow the regime and collaborating with foreign powers. 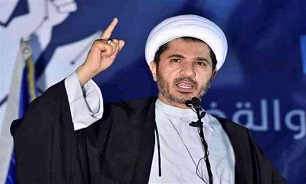 Sheikh Salman denies all the charges, saying he has merely been seeking reforms in the country through peaceful means.

Amnesty International and other human rights groups have already censured his arrest and called for his release.

Thousands of anti-regime protesters have held demonstrations in Bahrain on an almost daily basis ever since a popular uprising began in the country in mid-February 2011.

They are demanding that the Al Khalifa dynasty relinquish power and allow a just system representing all Bahrainis to be established.

Manama has gone to great lengths to clamp down on any sign of dissent. On March 14, 2011, troops from Saudi Arabia and the United Arab Emirates were deployed to assist Bahrain in its crackdown.

Scores of people have lost their lives and hundreds of others sustained injuries or got arrested as a result of the Al Khalifa regime’s crackdown.