At a time when the international civil society warns that civilian casualties are mounting and Yemen is the world's worst humanitarian crisis, the US government still has the face to claim Saudi Arabia 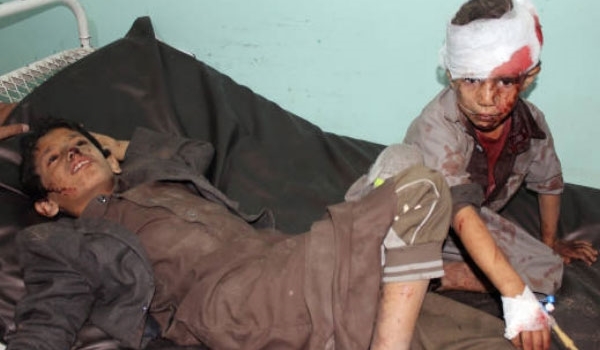 By the report of Navideshahed,This funny joke, this silly claim is simply intended to justify Washington’s criminal complicity and military-diplomatic support for the Saudi-led coalition in their illegal and indiscriminate airstrikes against Yemen that have been denounced by the world community as war crimes and crimes against humanity. To substantiate:

A- According to US Senator Chris Murphy (D-Conn.), the administration of President Donald Trump is denying the evident killing of Yemeni civilians by Saudi Arabia and its allies and for continuing to assist the Saudi-led coalition in the invasion of Yemen. How can the Trump administration deny what everyone can see with our own two eyes? It is as clear as day that the Saudi-led coalition is recklessly - and likely intentionally - killing innocent civilians and children and they are doing it with US bombs and targeting assistance.

B- According to Amnesty International, the US-backed war on Yemen is showing no real signs of abating. Horrific human rights abuses, as well as war crimes, are being committed throughout the country, causing unbearable suffering for civilians. Some 17,000 civilians have been killed and a humanitarian crisis has spiralled. Much of the world has ignored this raging conflict and heard little about its devastating consequences.

C- According to the United Nations, civilians bear the brunt of the Saudi war on Yemen. As well as causing the deaths and injuries of thousands of civilians, the conflict has exacerbated an already severe humanitarian crisis. This crisis is man-made, with the war deepening and exacerbating the humanitarian situation, and Saudis impeding the delivery of humanitarian aid. The Saudi Arabia-led coalition has unlawfully tightened its sea and air blockade on Yemen. Despite claims by the Americans and Saudis, the coalition continues to impose restrictions on aid and commercial imports of essential goods, including food, medicine and fuel.

D- According to the UN humanitarian coordinator Lise Grande, Yemen’s humanitarian situation has worsened rapidly since UN peace talks collapsed last week and fighting resumed in the port city of Hodeida, where hundreds of thousands of lives hang in the balance. The situation has deteriorated dramatically in the past few days. Families are absolutely terrified by the Saudi-led bombardment, shelling and airstrikes.

The peace talks failed because the Saudis did not allow the plane carrying the Yemeni side to fly and leave Sana'a.

E- According to Oxfam’s powerful report on the suffering of Yemen’s people, this is no natural disaster but the result of a callous, calculated and cynical power play over the fate of the poorest country in the Middle East. Sadly, the UK government is an active party in this tragedy. Despite growing evidence of the human consequences, the UK government has allowed the export of a staggering £4.3bn worth of arms to Saudi Arabia to carry out its bombing campaign.

All this and more serves as further proof that the US government and its NATO partners need to change track. They are on the wrong side of this historic human catastrophe. Instead of callously claiming that Saudi Arabia and the United Arab Emirates are doing enough to protect civilians in their unlawful military campaign against Yemen, they can start by insisting that the illegal weapons sales, military support and blockade of all Yemen ports is ended, that there is the free flow of goods within the country, and that there is an immediate ceasefire and re-energised peace talks.

By callously trying to justify and maintain more sales of weapons to Saudi Arabia and the UAE, the United States and its NATO business partners have become complicit in Saudi-UAE war crimes in Yemen. All of them are the reason why there is the dire state of the Yemeni women, men and children, now suffering a cholera outbreak without adequate food, water and medicines, mainly as a result of the bombing by the Saudi-UAE aircraft purchased from and refuelled by the US and UK governments.

Regrettably, despite all these documented human rights violations and crimes, and despite the passionate rhetoric of human rights organizations, the United Nations and even Western legislators, halting the war that exacerbates the humanitarian crisis in Yemen seems to be an afterthought for the US and Western associates.

In reality, these governments are openly defying and lying to the international community, signing the paperwork, and ensuring that Western aid shipments won’t stop for even a moment, with no intention to act to end their complicity in this dirty war of aggression and deceit.

Despite the international outcry and well-documented reports by the UN, Amnesty International, UNICEF and even American-European legislators, Washington and cronies continue to bury their heads in the sand, in complete denial that there is enough evidence of International Law and International Humanitarian Law being breached as a direct consequence of American-NATO involvement in Saudi-UAE war crimes in Yemen.