Israeli authorities have banned Palestinian resistance icon Ahed al-Tamimi and her family from traveling abroad, nearly two months after she was released from Israeli prison after serving an eight-month sentence for slapping an Israeli soldier. 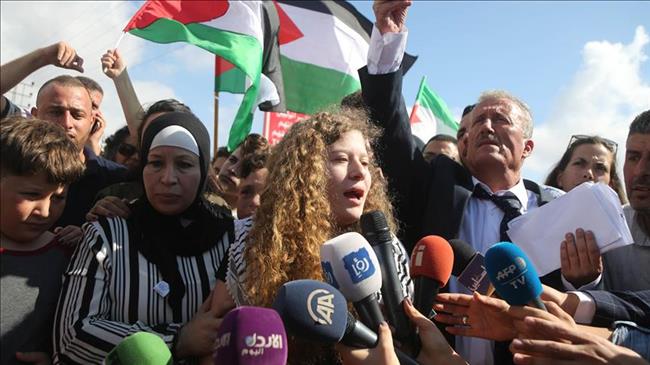 Her father Basim al-Tamimi told Turkey's official Anadolu news agency on Friday that the family had planned to travel to Europe via Jordan in order to participate in some events pertaining to the  the Palestinian protest movement, and the Palestinian prisoners' sufferings in Israeli detention centers.

They were, however, informed by Palestinian officials that Israel had banned them from traveling abroad without providing a reason.

He added that they had planned to leave on Friday morning.

She was also planning a visit to Iran.

In an exclusive interview with Press TV, Ahed's father said Israel barred her daughter's trip for fear that she would foil the Israeli regime's "schemes for the disintegration of the region" by forging close relations with the enemies of Israel.

Israel prevented Ahed from travelling abroad, because she "has become a global ambassador for humanity," and "Israel is afraid of the sympathy and unity among its opponents," Ahed's father told Press TV.

On July 29, Tamimi, a resident of Nabi Saleh village that is located 20 kilometers northwest of Ramallah, and her mother, Nariman, were released from an Israeli prison after serving an eight-month sentence on assault and incitement charges and arrived home to a hero’s welcome.

The 17-year-old girl was detained by Israeli forces last December after a video of the curly-haired teen kicking and slapping two armed Israeli soldiers in protective gear went viral on Facebook. Israeli military forces had raided her home to arrest her brother.

In March, an Israeli court handed down an eight-month prison sentence to the Palestinian teenage protester for "attacking” Israeli forces.

Israeli forces have on occasions arrested members of Tamimi’s family, including brothers and parents, for their opposition to Israel’s invasion of Palestinian lands.

Her aunt Bassima al-Tamimi was beaten to death by an Israeli policeman in 1993 while attending her son's trial session at the time.