We are looking forward to Hajj Ahmad Motovasselian’s return

We are looking forward to Hajj Ahmad Motovasselian’s return, God willing. Don’t call him a martyr; we have not been informed of his martyrdom. May God bestow His mercy and blessings upon your son, wherever and in whatever condition, he may be. 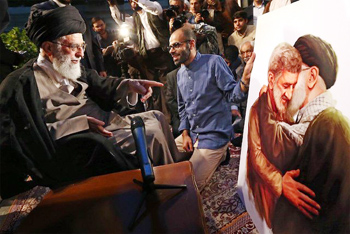 We are looking forward to Hajj Ahmad Motovasselian’s return, God willing. Don’t call him a martyr; we have not been informed of his martyrdom. May God bestow His mercy and blessings upon your son, wherever and in whatever condition, he may be. We pray that God will return this believing and righteous young man to us. Yes, Hajj Ahmad Motovasselian was a friend, comrade, and colleague of Hajj Hemmat; May God bestow His mercy upon them all.

Statements made during a meeting with the families of IRGC martyrs;December 15, 1996.

I knew Hajj Motovasselian up close

One of the important responsibilities of universities is building competent, outstanding and valuable forces for managing different sectors of the country and showing influential presence in the events of the country.

I would like to refer to the outstanding and immortal commander, Mr. Hajj Ahmad Motavaselian, as an example of outstanding graduates of this university. I knew this great man up close and I saw his diligence, high morale and efforts. He was one of the outstanding personalities during the Sacred Defense Era.In my opinion, you dear youth should read the biographies of these outstanding personalities who have taught us many lessons. You should read the biography of this great personality, particularly the part which is related to this dear commander's operations including his operation in the western area of the country, in FathulMubin and in BaytulMuqaddas. Another example is Shahid Mahmud Shahbazi who always cooperated with this great man.

Statements made during a Meeting with Professors and Students of University of Science and Technology; December 14, 2008. 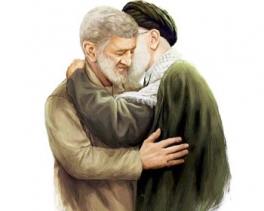 At a meeting with poets, a young man painted a creative portrait, in which he depicted how Hajj Ahmad Motovasselian would look if he returned to his country. In addition, he had portrayed Ahmad Motavasselian greeting the Leader of Revolution.

Upon presenting his masterpiece to Ayatollah Khamenei, he said: May God assure his return home. His Eminence replied: God willing; we are hopeful too.

US, Soviets, and regional reactionaries fought against us for 8 years, we defeated them all: Ayatollah Khamenei

Documentary Film about Haj Ahmad Motevasselian Was Made