Interest in the Theater of the Sacred Defense War 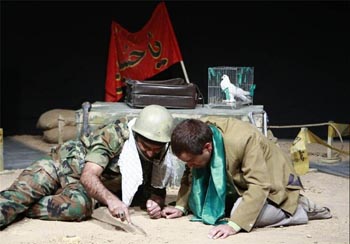 The term entertainment has been taken from the Latin root meaning holding and keeping. The complete form of the word means attracting the senses in an enjoyable and nice manner. Of course if the first step between addressee and the theater is not settled the end goal of the theater even if it is Sacred, valuable and thoughtful is not reached at and the first step in this process is the same interest and in order to achieve this factor it is necessary to infill entertainment to the theater; it is possible to make sure of the existence of entertainment in the theater so that the audience is attracted to the theater and if this is done the end goal of the theater will be achieved. We can refer to this point through a poem written by Wang Ken:
Enjoyment is a condition of being
The outcome of what one learns
An experience of this pleasure
No learning is possible without pleasure
And No pleasure is possible without learning”?
Of course enjoying a theater is a personal affair and it is possible that an addressee is pleased with a theater in an environment and in an amphitheater while the other may be far from any enjoyment. Kakora the Japanese philosopher has a minimalist story in this regard: "One day Sushi was walking beside the river while his friend was accompanying him. Sushi said enthusiastically how happy the fish are in the water. His friend told him that "you are not a fish then how do you know they are enjoying the water?”? Sushi answered: you are not me and how do you know I don’t know the fish are enjoying the water or not.”?
In the present century – the age of the colorful media and the extensive extra – territorial channels and satellites if the artists of the theater do not find his way to the heart of the addressee and entertain his thought and mind, the theater of the Sacred defense war would soon be faced with the crisis of audience.
We have to be a realist in this regard and we have to discover the causes and take the threats seriously so as to evade the crisis through making use of the appropriate policies and planning. One of the methods to reach the domain of theater of the Sacred defense war with a great multitude of audience is to be aware of the time and to have a complete grasp of it. Any age needs its priority and requirements.
With the entrance of the European theater and plays as well as the appearance of the new entertainments as well as the changes that has taken place in the social and political lives of the people living in Tehran and other cities common mourning is about to lose its importance and value step by step.
And Nasir Al – Din Shah made the best use of the situation and condition and he who was making entertainment use of any thing has tried a lot in this regard as well. He made Shabih Khani a means for stating his pomp and showing his grandeur and glory of his state and developed it to become an industry.
During the time of Nasir Al – Din Shah the number of the houses that were designed for mourning raised from 40 to 80 that is they doubled. We are aware that mourning very welcome at those times and all people were involved in it. It had such a valuable and grandeur position; you might remember the grandiosity of the mourning house of the state which had the capacity of 2500 people. One of the other factors that lead theater to be enjoyable is creativity and innovation. Of course it has to be stated that that there would be no creativity unless it comes into being under the influence of the cognition and understanding of the past experiences. "Everything is new and old. . It old because there are a lot of things that are similar to it and it is new because we see it new.”?.

One of the means of creativity can be technique. "Technique becomes a habit through experience. And while it is working it is normally fluent. Technique is regarded to be an observance. It is always necessary to remind oneself of this and one has to be very exact. These must what worry the artist. This great enthusiasm that the writer has in his technique should not be mingled with the Artistic Ecstasy. Whoever creates a technique might have some small mistakes and until he is not estranged from what he has made he can have some small mistakes like the others have.
One of the issues that has a close relation with interest and enjoyment is aesthetics. Whenever we talk about interest and enjoyment it is the genre of comedy that comes to one’s mind of course this is a mistake. Although the genre of comedy has a high capacity for the interest and attraction for he audience but in the theater of the Sacred defense war it is possible to create interest and enjoyment even through the most tragic of tragedies. There are a lot of things that cause interest and enjoyment but they are not beautiful in any way such as the inappropriate works and the terrible works of the actors that although are the causes of interest and enjoyment but they are not at all acceptable and beautiful rather they are unacceptable and terrible. There are a lot of things that cause worry and unhappiness of the mind but they are indeed beautiful and acceptable such as woeful songs and sorrowful stories as well as worried movements and bodies that have been dealt with in an artistic way and this why the tragic play are very sorrowful and full of tragic events although they are made very artistically and very meticulously. Therefore it is possible to consider beauty as a criterion and standard of a degree of interest and enjoyment that is gained from theater and there is no necessity to gain them only through laugh and entertainment.
Most of the successful theatrical works have special interest and enjoyment that have three characteristics: 1 . feeling 2 . intimacy 3 . clarity

In fact these three characteristics in the theatrical works ensure their interest and enjoyment to some extent and keep the theatrical works from direct speech, slogan, ambiguity and vagueness as well as haphazardness away. Unfortunately the majority of the works written in the domain of the theater of the Sacred defense war are afflicted with this weakness except for a few works written by . . . . . . . .Ali – Reza Naderi , JAmshid Khanian , Mohammad Charm Shir and Hamid Reza Azarang who form the main four columns of the literature of the Sacred defense war. . . . . . . . .

Relationship between War Plays and the Culture of Self Sacrifice, Martyrdom and Resistance