The memorial ceremony of "martyr Ibrahim Hadi" held in Ilam for the" youth Day" with the presence of people. 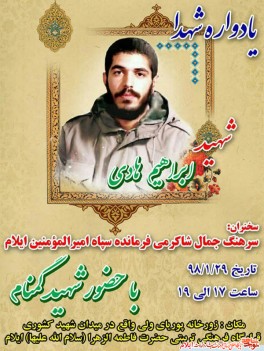 The memorial ceremony of "martyr Ibrahim Hadi" held in Ilam for the" Youth Day" with the presence of people.

Navideshahed – Martyr Ibrahim Hadi's memorial ceremony held in the "Youth Day" with the presence of people in the Ilam Province.

Here is a brief biography of martyr Ibrahim Hadi:

Martyr Ibrahim Hadi was born in 1957 in Khorasan square – Tehran Province. He was the fourth child of the family. His father loved him very much… Ibrahim was too polite and had a good manner with his family especially mother and father. When he was a teenager, he lost his father.

He spent the elementary period at the Taleghani School and after that went to Abu Reihan and Karim Khan School for higher levels. Finally he took his Diploma (degree) in 1976. He was too clever and brave.

He worked at Tehran Grand Bazaar while he was a student. After the Islamic Revolution Victory he was hired in the Ministry of Education. He was a devoted teacher and had a good relationship with all the students. He taught Pahlevani & Zoorkhaneh the traditional sports at school. He was too professional at wrestling and volleyball, he was too brave…we can see his braveness through the sacred defense.

Finally he was martyred un 1982 and joined his creator. His pure body remained in Fakkeh for ever. Nobody can forget martyr Ibrahim Hadi his resistance during the sacred defense.