Senior officials from the Iraqi city of Halabja and the Iranian city of Kermanshah have signed several Memorandum of Understanding (MoU) on a wide range of topics to boost all-out cooperation between the two border cities. 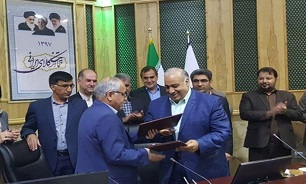 Navideshahed:
During a meeting held in Kermanshah on Sunday, Halabja Governor Azad Tofigh and Kermanshah Governor Houshang Bazvand signed a number of agreements in the economic, cultural and security fields. The economic MoU obliges the two sides to provide the necessary grounds for enhancing border exchanges between the two regions.

Heading a high-ranking delegation Tofigh is scheduled to hold separate meetings with the senior officials of Kermanshah and visit the western Iranian city’s industrial units.

The meetings will also focus on developing Poshteh and Shushami gates and opening Sazan border.

Paving the way for Iranian passengers' commutes from western provinces to Halabja will also be on the agenda of the meetings.

According to the latest data released by the Islamic Republic of Iran Customs Administration, Iraq is the main target of Kermanshah’s exports.