Mohammadali Aghamirzaei is one of authors in field of Sacred Defense who narrates history and memories of martyrs in his books. "Majnoone Hour" and "Ketabe (book) Ordibehesht"[1] are also written by him. 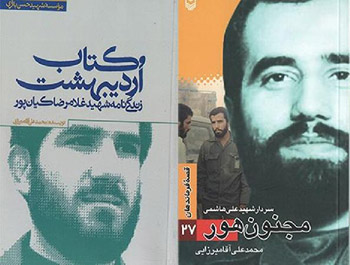 Mohammadali Aghamirzaei is one of authors in field of Sacred Defense who narrates history and memories of martyrs in his books. "Majnoone Hour" and "Ketabe (book) Ordibehesht"[1] are also written by him. The first that is about Sardar (General) martyr Ali Hashemi, is dedicated for teenagers. The second book narrates life of martyr Gholamreza Kianpoor for adults.

"Majnoone Hour" is one of book series of "The Story of Commanders". The series states about commanders of Sacred Defense and leafs throw their life story.

The book starts with chapter "Sardar of Hour", with the soft sound of the waves that overlapping, and children with their mother in a house in the north. Ali is one of the children that his history begins with the story of his mother exile in the north of Iran. The next chapter is "Bazieh Mobarezeh" in which Ali of the story slowly starts struggle against the Pahlavi regime. His adolescent mind is engaging several questions: "Why whatever his father worked, he couldn't add another room to his house?" "Why do some people force others?" And "Why do cops always advocate the bad guys?" such questions are that induce Ali to struggle and he, alongside his friend and in a situation with his sisters and brothers, is dispensing declarations.

Struggling against Pahlavi Regime is resulted in victory of The Islamic Revolution, and then events like fighting against Arab People and Baath Party in boundaries and Imposed War of Saddam against Iran occur. The main character of "Majnoone Hour" is also engaging such events till the last chapter in which situation of martyr Ali Hashemi and his corps confronting Iraqi Army in Majnoon Island is described. The chapter ends with martyrdom of Ali Hashemi.

"Majnoone Hour" is especially for teenagers. Writing for this group is specific. They must accompanied the content and indirectly learn from it. "Majnoone Hour" has a simple prose that accompany the teen audience and teach him indirectly too. It is more likely that teen audiences don't identify martyr Ali Hashemi. He is introduced shortly for teenagers in preface. Preface is consists of quotes of Mohsen Rezaei, who was commander of Sepah during The War. His statements are part of oral history and complementing the book information.

"Majnoone Hour", which is published by Office of Resistance literature and Art and Sooreh Mehr Publication in 74 pages in 2015, has a chummy prose. This part of the book:

"Other soldiers lied down and shot their ballets where he had fallen. He felt a burning in his neck and chest and a fatal pain involved all his body. But a few moments later it was lessened and he relaxed. At the moment, he was float in a sweet rapture. He felt he was lightened and like a kite was taking off. He was happy. He blinked and saw himself in 10 meters height that, covered in blood, lied down near a burning Helicopter and Iraqi corps standing him... ."

Author Hesitation in the Way of Writing

The author himself is present in the story. He is seeking clues of martyr Gholamreza Kianpoor, he finds them too but he is hesitated for writing about martyr and also how write it. The hesitance is appeared directly since the first chapter: "writing biography of a martyr is something he has done several times; Weather in a short manuscript or a long one. His profession is writing biography of martyrs. He is so skilled in doing this and it is his specialty. But this time, it is a long time that he is hesitated in narrating life of the man and doesn’t know how talk about the unkown Sardar of the War; as he is prevented by a supernatural power so that the martyr narrative not to be written like usual versions of biography."

Author hesitance in the way of writing about Gholamreza Kianpoor could be seen in different chapters of the book and even it continues till chapters 8 & 9, "in other side, now he can't' imagine Gholam alongside the magic machine, as there is something wrong."

In "Ketabe Ordibehesht", moreover author presence and his hesitance in the way of writing, we see unifying him and the main character of the book. The author is so concerned about being united with the martyr. Putting his photo on the screen, listening audio files in order to understanding him more and even behavior like him are some of author's efforts. Finally, in the last chapter, the author is unified with the martyr that its product is publishing "Ketabe Ordibehesht".

A Different Style and Applying the Quotes

Among books about martyrs, we are facing weather the first person narrator or the third person. In "Ketabe Ordibehesht" the third person narrates. The narrator, sometimes talks about martyr Kianpoor and sometimes about himself, his hesitancies and his life. These talks are sometimes part of difficulty of writing biography of martyrs. However, talking about himself and the martyr together has created a different style for the book that makes it unputdownable and sometimes causes confusing the audience.

Mohammadali Aghamirzaei, unlike "Majnoone Hour", has not applied frank prose and tries to make reading the book for the audience more chummy by some tricks. But "Ketabe Ordibehesht" uses quotes also and it concludes quotes of the martyr's mother to his comrades. The same quotes make the book more approach to the book series of oral history of the War.

The book has a simple cover including picture of martyr Kianpoor and the title. But the title is so cut as part of the phrase "Shohadaye Etelaate 2" has disappeared. Without considering the detailes, "Ketabe Ordibehesht" is a successful book and it is quietly clear that the author tries to use an elegant prose and a different style.

A part of the "Ketabe Ordibehesht":

"The twilight of the dawn, with light of explosion of fougasse and mortar and canons, dispersed a vermilion color on the dawn of February 1987. The sun still was not arrived in horizon behind the hill to inviting morning in roasted plain of Shalamcheh. They had passed swamps, bread-shaped trench and Shalamcheh tower and now standed in front of the last concrete trench, alongside corps of Aliakbar's battalion. A ZPU-4 and two DShKs were shooting relentlessly toward corps who since midnight till now they have passed minefield and dreadful bread-shaped trenches. ZPU-4 machine gun grazed and had confined them to the ground. If they passed it the axis lock would be opened by Operation Karbala-5 and Iraqi withdrawing was absolutely… "

"Ketabe Ordibehesht" was published in 207 pages in 2015 by institution of martyr Hasan Bagheri.

Third volume of ‘Stars of the Air Fight’ authored

"A Trip to Halabja", the Story of Halabja Chemical Bombing in 1987